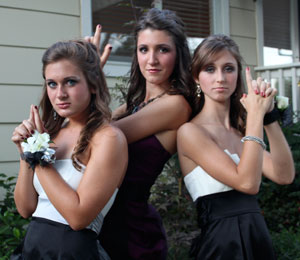 As I look at the playlist for this year’s dance (my daughter caught a sneak peek of it on Facebook and sent me a copy—I just wrote about it in detail here in my latest post at DougFields.com), I began second-guessing my decision to let her go. So I decided to do what I tell all my parents in my parenting workshops: “Have a dialogue with your kids about it.”

Alyssa and I go to breakfast every Tuesday morning. It’s an awesome time for just the two of us to talk about life. She’s a senior now, and I’m already starting to dread the thought of her leaving for school in less than a year now.

This morning I asked Alyssa a rather poignant question about the dance. “Alyssa, you know I trust you, and I know that you want to do what’s right. So tell me again… why am I letting you and your sister go to the Homecoming dance this weekend?”

She chuckled at me because we’ve had this conversation so many times. She’s sat in my parent workshops and actually fielded questions from parents asking her, “Is your dad too strict?”

Alyssa and her sister are going to the Homecoming dance this Saturday with two friends from church. They are coming to our house and taking pictures, and then the guys are taking them out to a very fine dinner establishment (In & Out Burger). They’ll go to the dance for a little bit where they dance in a group, then they’ll come back to our house and hang out, eat a little unhealthy food and maybe even watch a movie.

“The movie was one of the best parts last year,” Alyssa reminded me. “My friends and I were all watching High School Musical 3, while all my friends from school were getting wasted.”

Here’s just a piece of our conversation this morning:

DAD: So how do you, as a Christian, not get caught up in all that crazy stuff that’s going on out on the dance floor—the bad lyrics, the grinding.

ALYSSA: First of all, we’re not even near it. We hang out on the edges of the dance floor with all the nerds. We actually face each other and just have a good time dancing. You’ve seen us dance.

(I have seen them dance. Alyssa dances around the house all the time. She’s hilarious.)

JONATHAN: But is there ever pressure for anyone in your group when you’re the only ones not grinding?

ALYSSA: (chuckling) First, we’re not the only ones. About half…

JONATHAN: (not letting her get away with that) I thought you told me about 75% of the floor was grinding—the girl backing it up to the guy?

ALYSSA: It depends what dance. At last year’s homecoming at (names school she went to) it was easily 75% grinding. But at this year’s opening dance it was about 50%. (Alyssa is the yearbook photo editor. She was at a dance earlier this year taking pictures.)

ALYSSA: Yeah… so about half are grinding, and then a lot are just bouncing around and having fun. There’s a lot of nerds on the edges who just do like us—laughing and having a good time dancing innocently.

JONATHAN: But they’re still playing all the bad music…

ALYSSA: Yeah, there’s bad music there. It’s the clean versions, but kids still know the difference. But honestly, I don’t really know most those songs because I don’t listen to them. So I don’t catch a lot of that. And in the short time we’re there, I usually notice a few bad songs, but most of the time we’re just dancing around and talking with each other. You notice the bad music more than most people do, Dad.

Dad, the evening is really fun. Girls want to get dressed up and go out. We go to dinner, we take fun pictures (like the one they took last year at the top of this post), we hang out for hours afterwards. The dance is really a small part of the evening. And you know me… if it’s lame or if it’s really bad, we’ll just leave.

There you have it. From the mouths of babes.

So I’ll say it again. Why am I letting my daughters go to a dance where there’s going to be grinding and bad music? Well, because as parents who want to set appropriate guidelines, we need to pick our battles. If a daughter asks her parents to go to Homecoming and parents refuse… it’s going to be a battle. Is she asking me to buy beer for her? No. Is she asking me if she can spend the night at a guys house? No. When you really look at what she’s asking….

So why would I want to be the one to say “no” to her when she’s going to turn 18 in less than a year and then she can do whatever she wants? Is this the battle where I want to have the last stand?

Frankly, I think she’s making a good choice here… and I’m proud of her.

What about you?
Would you let your own kids go?

What scriptural backing can parents use to make this decision?

IF YOU LIKED THIS POST, YOU’LL REALLY ENJOY JONATHAN’S BOOK,
CONFESSIONS OF AN IMPERFECT PARENT

14 Replies to “Permission to Go to the Homecoming Dance”