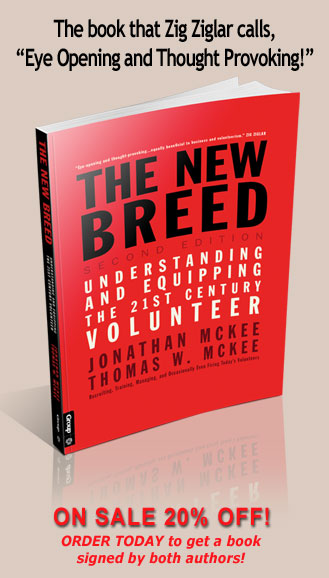 Five years ago this fall we released the first edition of The New Breed, claiming that volunteers are different… and the way we recruit and manage them needs to be different. Any youth worker, children’s worker, or volunteer manager of any kind probably has noticed that. Maybe that’s why The New Breed is my top selling book on Amazon right now.

Interestingly enough… things have changed exponentially in 5 years, changes that are affecting all of us and calling for an even greater up-to-date leadership. To be ahead of these changes, we have just released the second edition of The New Breed. Here’s an excerpt:

Today’s volunteer doesn’t need a dayplanner, a watch, a computer, or even a landline…they just need a smartphone.

What is next? Real-time hologram projections of my board members at our board meetings?

I almost hesitate to write about technology, in fear that by the time it goes to print it will already be out of date. You’d be amazed if you saw how much we had to already totally revamp the technology chapter for the second edition of the book. So much has changed in just 5 years. For example:

I can only imaging what new developments in technology will emerge in the next five years? Personally, I’d settle for a soft-serve ice cream dispenser in every vehicle!

So how do advances in technology affect the world of volunteerism?

I guess that’s like asking, “How did the invention of the plane change world travel?”

The ‘new breed’ of volunteer communicates faster, more efficiently, mobilizing the masses more than ever before. Consider what happened in Egypt in 2011 where a whole government was toppled by digital crowdsourcing. This isn’t the first time in history a government has been toppled by “the people.” “It is a truism in political science that successful revolutions are born in the streets — from the Boston Massacre of March 1770 and the storming of the Bastille in Paris in July 1789, to the streets of Cairo in January and February 2011,” Sam Gustin of Wired writes. “What has shocked most observers of the current Egyptian scene is the sheer speed with which the regime fell — 18 days.”

The organization of today’s revolutions just transformed from analog… to digital.

What else has changed in the last 5 years?
The first edition of our book isn’t that OLD… it’s just that we quoted so many studies and did so much timely research in that book that we wanted to keep it current. The publisher agreed so we released a new edition that includes the following changes:

A Special Deal from Jonathan
We’re offering a special deal only available on my website. I’m knocking 20% off the cover price, AND, right now you can get the book signed by both authors—me and my dad.

GET THIS SPECIAL DEAL NOW

I WANT TO KNOW MORE ABOUT THE BOOK