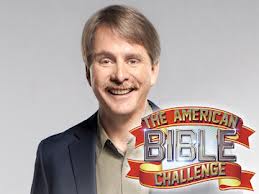 Normally I wouldn’t think that the words Jeff Foxworthy, the Bible and Primetime would be used in the same sentence… but tonight, they will be.

Our TheSource4YM.com movie guru Todd and I were lucky enough to get a sneak peek at the premiere episode and think many of you will want to give it a peek for yourselves on cable tonight.

Todd sat down with his family to watch the sneak peak this week and shared his thoughts below:

When I discovered the Jeff Foxworthy was hosting a Bible trivia game, I knew I had to give it a shot. I heard Jeff at Catalyst and was pretty impressed. So this week when I received the screener for The American Bible Challenge, I sat down with my family, popped some popcorn, put in the DVD and played along. Our family had a blast answering questions about some of our favorite bible stories and characters.

There is plenty about The American Bible Challenge to get excited about. First and foremost this is a TV show about the Bible that is not making fun of the Bible. And that alone is a big reason to cheer in today’s media climate.

The second reason to cheer is Jeff Foxworthy – he is flat out hilarious. Like most games shows, the entertainment quality will be determined largely by the contestants, namely their stories and excitability. But with Foxworthy leading the way, I think there will be plenty of comedy in every show.

Then there are the actual questions. At first they were really easy, but as the show progressed, so did the level of difficulty. In the final round the contestants are given the category just like in Jeopardy. But unlike in Jeopardy, the two remaining teams are given a few minutes for a “Bible Study” before the questions begin. That’s pretty clever.

Finally, I loved was the fact that the teams are playing for local ministries or charities. Makes me what to get a couple of friends together and go play for The Source for Youth Ministry, helping youth workers and parents like you! Who’s with me?

With all those cheers in mind, I do have two small negatives—just keeping it real. The first one is the easier one to say. This show is very different from your traditional game show. There are teams of three contestants instead of just one player and each round is like a new game with new rules. So the rules and details can be a little bit cumbersome. Foxworthy spends more times explaining rules then he does cracking jokes. I’m hopeful that in time the transitions will be less awkward and pace will pick up.

The second comment is the one that I’m afraid will get me into trouble. But Ephesians 4:15 says to speak the truth in love…so here we go. As I look around I often see the Church in America do things that have a healthy amount of cheese. Whether it’s the “Jesus Meant to Die” (that looks a lot like the Mountain Dew logo) or the Left Behind board game, I just get so frustrated when our faith is cheapened for the sake of cleverness. It’s not like the game show was unwatchable, in fact we really enjoyed it, but when teams are the Gospel Geezers and The Suburban Saints, how do they expect me not to roll my eyes. Then there’s the choir…yeah I said a choir. They are the lead in and lead out to commercial breaks. It’s not bad, it’s just a little cheesy. And as a youth worker constantly trying to reach unchurched kids for Jesus… it would be easier if we didn’t give them so much ammo to dislike us.

Can I please order the Christian entertainment without cheese? And yes… I will have fries with that.

At the end of the day, The American Bible Challenge is a TV show that you can gather the family and watch together…and my family loved it. We were laughing and answering questions – there is no doubt we can’t wait for the show to hit the air.

THE AMERICAN BIBLE CHALLENGE will premiere Thursday, August 23, 2012 at 8 pm ET/PT on GSN.

4 Replies to “Jeff Foxworthy, The Bible and Primetime”