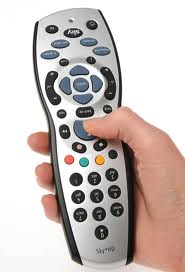 Funny thing… most Americans don’t use this wonderful invention.

Don’t believe me; check it out for yourselves. Nielsen releases quarterly reports with this data. They must have some guy with glasses and pencil who figures all this out, because Nielsen’s most recent Cross Platform Report (free registration to access this report revealing American TV viewing averages from the last quarter of 2011) reveals that the average American watches 33 hours a week of traditional TV. That means just turning on a live TV and sitting through commercials.

That same Average American only watches 2 hours and 34 minutes per week of “time shifted” TV—that means watching the TV you want, whenever you want, on your Tivo or DVR.

As you can see, this report not only displays the numbers for the total American population ages 2 and up, but it also breaks down the numbers by age and by homes that have DVRs. For example, people in my age bracket (35-49) who own DVRs watch an average of 6:38 minutes of TV on DVRs per week compared to 34 hours of traditional TV (live with commercials).

I really struggle understanding why so few people use DVRs, even homes with DVRs. I’ve read the reports about how many people just turn their TV on when they get home, leaving it on during dinner, etc. The average American watches 5 hours of TV a day, 98% of that on a traditional TV. To me…. that just seems silly. Why crank by hand when you have a powerdrill sitting right next to you?

Consider the Olympics. I don’t think the average person wants to watch rowing, men’s volleyball, and women’s boxing. Most people have an event or two they like. The DVR gives you the freedom to pick and choose what you like. That’s what I’ve been doing.

From day 1 of the Olympics I’ve recorded everything. On Sunday afternoon we sat down for the first time to watch a bit of what I’d recorded. We watched over 20 hours of Olympics in under two hours. We stopped at all the swim races with an American, and then sometimes on a random event that captures our interest, like the biker from Kazakhstan that bolted to the finish in the men’s bike race. But I think viewing must vary for each person. My family has a few cyclists, my self included, so a bike race intrigued us. I’ve run marathons so I’m intrigued by the marathon. My daughter Alyssa plays water polo, so we’ve been watching water polo.

Occasionally we’ll watch the interviews after a swim race or a gymnastics event. Is it just me, or do these ladies with the microphones irritate you? “You just failed in front of the entire world. What was going through your mind when you saw the swimmer in the lane next to you capture the bronze and leave you with a fistful of nothing?”

There was several times where I wanted to see someone just pull a swim cap over that lady’s face!

We’ve watched a little bit of gymnastics too, especially enjoying the girls work together and encourage each other as a team. I can’t say that I know what I’m watching though. With swimming it’s easy to tell who’s winning. “Hey, that guy’s ahead of that other guy!” But with gymnastics, I’ll see some girl flip like a fish in the air and land perfectly… and the commentator points out, “Oh, that will cost her a point! Her pinky toe was pointed 30% to the left when she landed that quadruple flip. Epic fail!”

4 Replies to “I Love My ‘Fast Forward’ Button”