Nicki Minaj might just be the Gaga of Hip Hop. Her music is growingly popular, her antics are over the top, and her discretion is slim to none. But underneath all that fancy getup is a lost young girl named Onika who desperately needs to experience the love of Jesus. How can we teach our kids compassion for Onika, and, at the same time, discretion with her content?

Nicki Minaj is rapidly becoming a household name. Her new music video Beez in the Trap is rapidly gaining popularity, sitting at #2 on iTunes videos as I write this. Not bad for a song with the chorus:

Her song Starships is currently #9 on the Billboard Hot 100, her album Pink Friday: Roman Reloaded sits #6 on Billboard’s album chart, and in the last few months Nicki’s had three different songs in the iTunes Top 10, just a click away for our kids.

Do your kids have Nicki on their iPod?

Are a few curse words all there is to worry about?

If parents are trying to determine whether Nicki’s music is appropriate for their kids, it won’t take long for them to decide. One of Nicki’s first rides up the charts was a few years ago in her collaboration with Lil Wayne, Drake and other rappers in the popular Young Money song BedRock (No, this song is not about the Flintstones). Here’s a snippet of the chorus:

Nicki doesn’t take long to show her true colors during her part of this song. Her lyrics kick in with:

Okay, I get it, let me think, I guess it’s my turn
Maybe it’s time to put this p**sy on your side burns

Yes, Nicki is making an oral sex reference. Not just any reference, one that explicitly talks about the plus-size of her anatomy enveloping someone’s entire face, trumping the lyrics by female rapper Amil who said, “Before I put this p**sy on your mustache” in the Jay Z song Can I Get a…

Nicki is known for her foul mouth and full figure. Guardian columnist Simon Hattenstone describes her as having “a body like Marilyn and a mouth like Eminem” in his in depth interview with Minaj. Nicki gained a lot of popularity with songs like SuperBass and Stupid Hoe (I’m not making these titles up). A quick peek at the videos and Googling of the lyrics will reveal her pattern: bragging, cursing, and my biggest concern—the sexualization of girls.

I guess crude talk and racy videos weren’t enough for Nicki, because at the recent Grammy’s she upped the ante with her performance of her song, Roman Holiday, engaging in an exorcism of sorts. In a post Grammy interview she confessed that she has a demon named Roman living inside of her.

So is Nicki really intrigued or even possessed by evil spirits, or is this just another attention-getting ploy?

Does it really matter? Is that the deciding factor for parents teaching their kids discernment?

Many parents don’t find a problem with Nicki as long as you download the “clean version.” That seems to be the case with the proud parents of these two cute little girls… and Ellen DeGeneres. So is Stupid Hoe “clean” when you simply take out the curse words? Is Beez in the Trap “clean” when the profanity is removed? (Maybe parents should know a little more about Nicki and what terms like “Beez in the Trap” really means.)

Nicki continues to grow in popularity and as a role model. The question is: Are Nicki’s songs and music videos part of their regular entertainment-media diet?

Getting Our Teenagers Talking About Nicki
After my parent workshops parents always ask me what I say to my own kids about artists like Nicki. I always answer, “As little as possible. I try to get them talking.”

I’ve had some of these conversations with different teenagers already about Nicki, asking them what they think of her lyrics, her videos, and her claims about demon possession. The conversations eventually lead here: “Nicki seems to be a girl looking for answers in the wrong places. We should pray for Nicki… and I agree with you, I don’t think we should download her songs.”

If our kids are Nicki fans the biggest mistake we could make is to just blindly label her “bad.” After all, aren’t we all “bad?” How bad is too bad? I don’t know about you, but I don’t want to be judged with that measuring tape. Perhaps we need to teach our kids compassion for people, while at the same time teaching discernment with the content they’re filling their heads with.

Compassion starts with stepping into the shoes of others. If you read her story, Nicki, born Onika Maraj, has a father who was an alcoholic and a drug addict. Nicki’s mother even claims that he tried to burn down their house once. Nicki has a history. She’s the woman at the well (John 4). She’s Zacchaeus (Luke 19). She could even be the demon-possessed man (Mark 5). We can learn a lot reading how Jesus responded to these people. While the religious stand and accuse, Jesus responds in compassion.

Perhaps when we see Nicki, we should try to look through Jesus’ eyes and really see Onika.

Does that mean that her music is fair game?

Compassion doesn’t give license to lack of discernment. We need to teach our kids love and wisdom. Just look at Ephesians, Chapter 5. It starts by affirming us to “walk in the way of love,” but then encourages us to steer clear of sexual immorality, impurity, greed and a whole list of foolish behavior. Avoiding those behaviors is basically paraphrased and summarized in vs. 17, “Don’t be foolish.”

If we are talking with kids who don’t see the Bible as an authority… do they believe their doctor? Because the Journal Pediatrics spells out the research clearly… the lyrics affect young people.

If your kids are Nicki fans, what are some ways you can help them learn to avoid being foolish with their entertainment media choices? How can we equip them to steer clear of bad content on their own? That’s the real trick—not over-reacting, but interacting, opening the doors for healthy dialogue.

Discussing Nicki’s Content
If your kids have some Nicki songs, try to get them talking about her content. Google the lyrics to SuperBass, Stupid Ho and Beez in the Trap. Go over the lyrics with your kids. Don’t’ lecture, just ask questions, questions like…

–       What does she mean in SuperBass when she says that all a guy has to do is give her a look and her panties are coming off?

–       What do you think most girls who listen to Nicki are hearing when they hear these kinds of lyrics?

Pull up Nicki’s music video for Beez in the Trap on iTunes (just click videos on the front page- it’s on the top of the charts right now). Hit the preview button and simply watch the 30-second preview. Then ask…

–       What would happen if all girls started acting like Nicki and these other girls in this video?

Read the definition of “sexualization” from the APA right HERE (those first four bullets). Ask your kids to provide an example of sexualization. Ask them if they think Nicki’s videos are an example?

Realize that many kids are going to respond by saying that they don’t listen to the lyrics and they don’t pay attention to that stuff in the videos. Ask…

–       How do young people dance at a school dance? Why? Where do they get that idea from?

–       Is there a chance that many of today’s teenagers have been sexualized by role models like Nicki?

If you’re talking to boys, ask…

–       Is it possible that a lot of guys will probably lust when watching stuff like this?

You might conclude by asking, “So, if Nicki’s lyrics are recommending girls to act promiscuous, and her videos are proving that she is sexualized, and many who watch the videos are slowly being sexualized, or lusting…do you think we should make Nicki part of our music library?

Let your teenagers come to the conclusion.

Then take some time and truly pray for Onika. 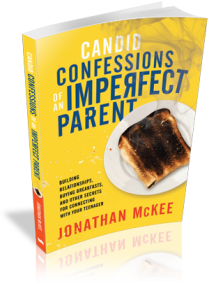 IF YOU LIKED THIS POST,
YOU’LL LOVE JONATHAN’S BOOK,
“CANDID CONFESSIONS
OF AN IMPERFECT PARENT”