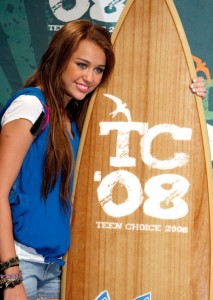 When Miley’s in the headlines… I’m always a little worried. Miley is a good clean girl, but she’s a teenager who’s grown up in the spotlight. That’s a tough gig. And she’s made her fair share of mistakes. Haven’t we all?

I’ve blogged about Miley’s ups and downs before, but today I’m compelled to share, Miley made me proud twice yesterday.

1. Miley didn’t fall into the trap of controversy by kissing the girl…

Miley might have had the opportunity to join the legacy of Madonna and Brittany on stage last night with Katy Perry. Media Life Magazine provides the details in their article about all the buzz:

Between that infamous Vanity Fair photo shoot and the suggestive pictures that have been floating around the internet, Miley Cyrus apparently feels she’s done enough to sex up her image this year.

The 15-year-old pop star, who hosts Fox’s “Teen Choice Awards” tonight at 8 p.m., turned down an offer from “I Kissed a Girl” singer Katy Perry to recreate the infamous Britney Spears-Madonna liplock from the “MTV Video Awards” a few years back.

Whew! We’ve had enough of Katy’s influence this year.

The Teen Choice Awards is not always an easy pill for parents to swallow ( a show that twice over the years has topped the Parents Television Council’s “Worst Family TV Show of the Week”). Last night, Miley was a breath of fresh air on the show.

Today I’ll provide all the details in my annual review of last night’s show in our Youth Culture Window article (posted tonight). But it was nice to have a host that not only avoided risque humor (like past hosts), but when winning her own award, gave a huge thanks to “the most important man in my life, who I love so so much, and thats Big Jesus Christ up there (pointing up).”

One Reply to “Good for Miley”