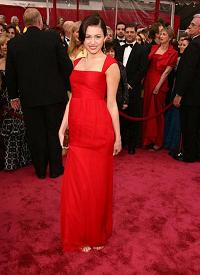 Miley’s the hottest thing in the world of young girls right now. I’ve blogged about her before, about her popularity, and her as one of the biggest trendsetters in 2008. There’s no question why Barbara interviewed her. Miley is THE draw for young girl audiences right now.

The interview was short, but I thought Miley did well. She talked about her faith a little bit, and might have been perceived by some as a little cocky, once almost sounding a little condescending… but she’s young and I think she did fairly well for her age and degree of difficulty of the questions she was being asked.

We don’t know much about her faith, just that she uses the word “Christian” (which means nothing these days- 81% of Americans claim to be “Christian”) referring to herself, and she seems to reflect good morals (a breath of fresh air today) in the midst of a world full of poor role models. Barbara asked us about this.

We transcripted a snippet of the interview for you:

Barbara: Miley, you’re living here in California and you’re 15 years old and you pick up the papers and every day practically, you read about another young star, some of whom were Disney stars, how can you be certain that what happened to Brittney and Lindsay and to Jamie Lynn Spears won’t happen to you?  What will be the difference?

Miley: For me, as I know, that some people don’t have a family to fall back on like I have and that’s when something greater than even that comes in and that’s faith and that’s what I have for me it’s what keeps me strong.  And I know that some of these people you know do have Christian families and they’re just, you know, not seeing that they’re so much greater than the materialistic things that are there right now than, like, you know, going out and the parties and whatever, but the people that are the ones that you want to hold on to are the people that tell you the truth and that’s your family and that sometimes you know can be a little bit harsh and can you know say things that have to be honest and that can hurt sometimes.

Barbara: What do you think about Jamie Lynn Spears?  I mean she’s pregnant, she’s only 16.  Can you imagine that?

Miley: No, and I think, you know, it’s definitely hard when it’s your friends. Jamie Lynn is you know a friend of mine. But also I know how strong she is as a person. I just think it’s pretty cool that she has stepped away cause that’s what I would have to do.

Miley: Mmmhhmmm. I know basically all of those girls, which is really crazy to see that.  But, my main goal for me is the reason that I also feel pretty confident that I won’t end up like that is because I can go out there and be kind of like a light to them and make them want to live the way that I, you know, long to live.

Barbara: Your birth name is Destiny Hope. What’s your destiny?

Miley: The reason my dad named me Destiny Hope in the first place is because he always said it was my destiny to bring hope. And I think that’s kind of the thing that I want to do. There’s been so many people that have come up to me and say, you know, the hour that we are watching your shows are the times that my kids are happiest, they’re smiling, they’re laughing.  And that is what I long to do, is to be the person that you can, open up a magazine and see my face and there’ll be something, you know there’ll be a quote that’s so positive and that will be like, you know I’m having a hard day today, but you know what Miley said will get me through it. And so that’s what my destiny is.